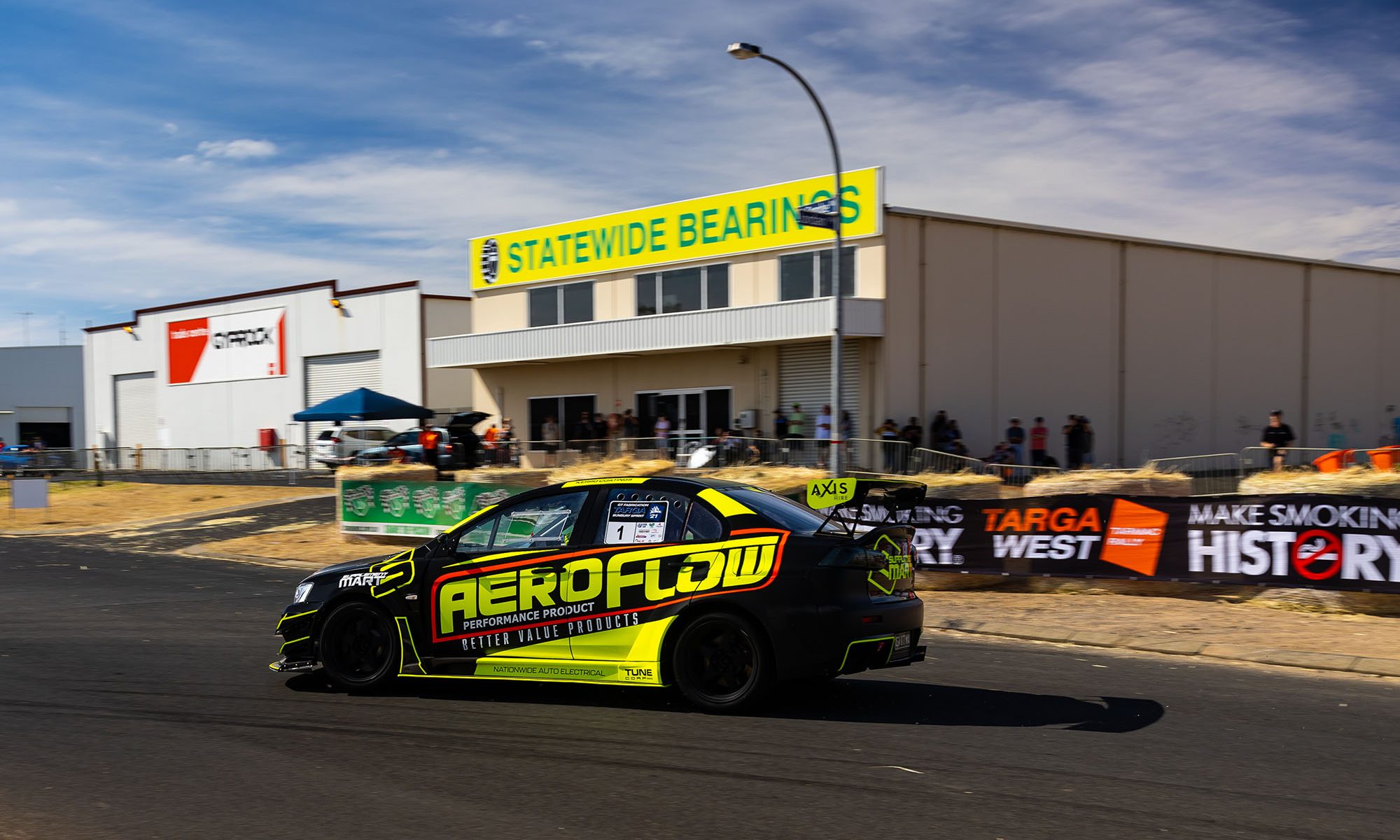 The heat was on at the GT Fabrication Targa Bunbury Sprint which tested man and machine last Sunday in temperatures of 30 degrees and not a breath of wind.

There were 120 competitors who lined up to race the clock in the Halifax Light Industrial Area along a 4-kilometre course, four times clockwise and four times anticlockwise; 94 competitors completed all eight runs.

Finishing fastest was Troy Wilson and co-driver Toni Cameron in Wilson’s 2010 Mitsubishi Lancer Evo X, his fourth win at the GT Fabrication Targa Bunbury Sprint, but this one wasn’t without it challenges.

“On my way to Bunbury, an hour out of Perth, I realised I’d left the keys to where I was staying, so I had to turn around and go back with the car on the trailer, and we almost missed scrutineering, and that was just the start,” Wilson said. 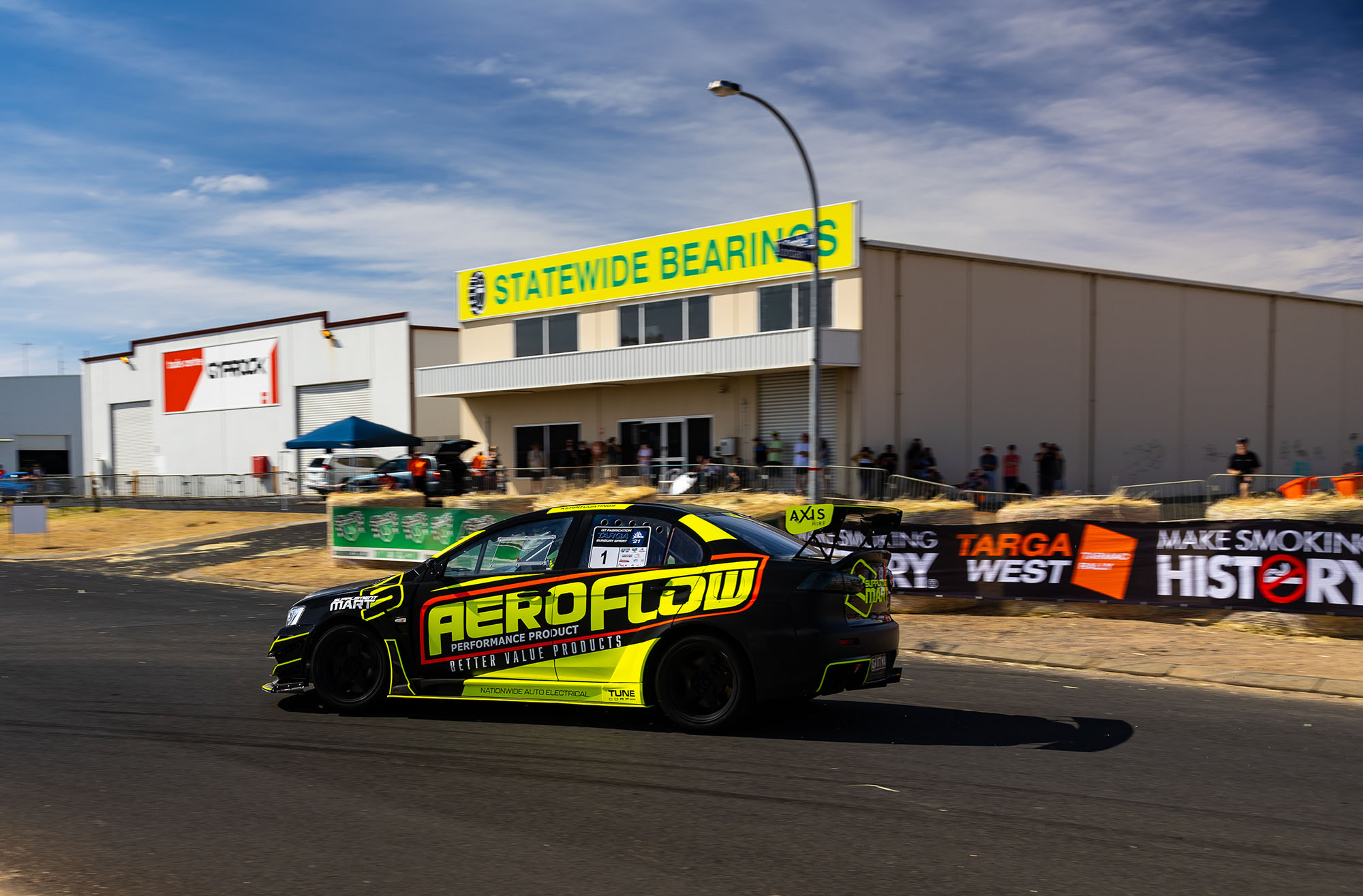 “Then at 6pm on Saturday night, the car was running on three cylinders, and then we realised we left our pace notes in Perth, so instead of enjoying the Show n Shine and dinner, we were out there beating darkness trying to rewrite our notes.

“Honestly, I thought that it was a sign that I shouldn’t do the event, but I don’t give up, and kept doing all we could to make it happen.

“On Sunday, I had a bad first half of the day and we had a lot of gremlins in the car’s electrics, it went into limp mode three times, and I estimate that I lost between 15 and 20 seconds,” Wilson said.

At the half way point, Peter Rullo and co-driver Jimmy Marquet were leading in their 2020 SSC Lotus Exige, looking for back-to-back wins after their success at the Make Smoking History Targa West in August, however, the duo were forced to retire on the fifth stage with a mechanical, a suspected drive shaft issue.

Wilson said he was able to get hold of his tuner in Perth and fix the car’s electrics with the laptop to prevent it from going into limp mode.

“I lost launch control completely in the morning sessions and had to manually launch the car in the afternoon and we also made a small suspension change during the lunch service which improved the handling,” Wilson said.

“We almost didn’t make it to the start line, we literally finished the car two days before the rally and didn’t have time to test it.

“I’m really happy I was able to overcome all those problems and finish the event.

“Despite it all, it was an awesome rally, well organised by Targa West Event and the Bunbury Sprint is everyone’s favourite event, the spectators make it so much better. Thanks to sponsors and volunteers, we couldn’t do this without them,” said Wilson of Karrinyup. 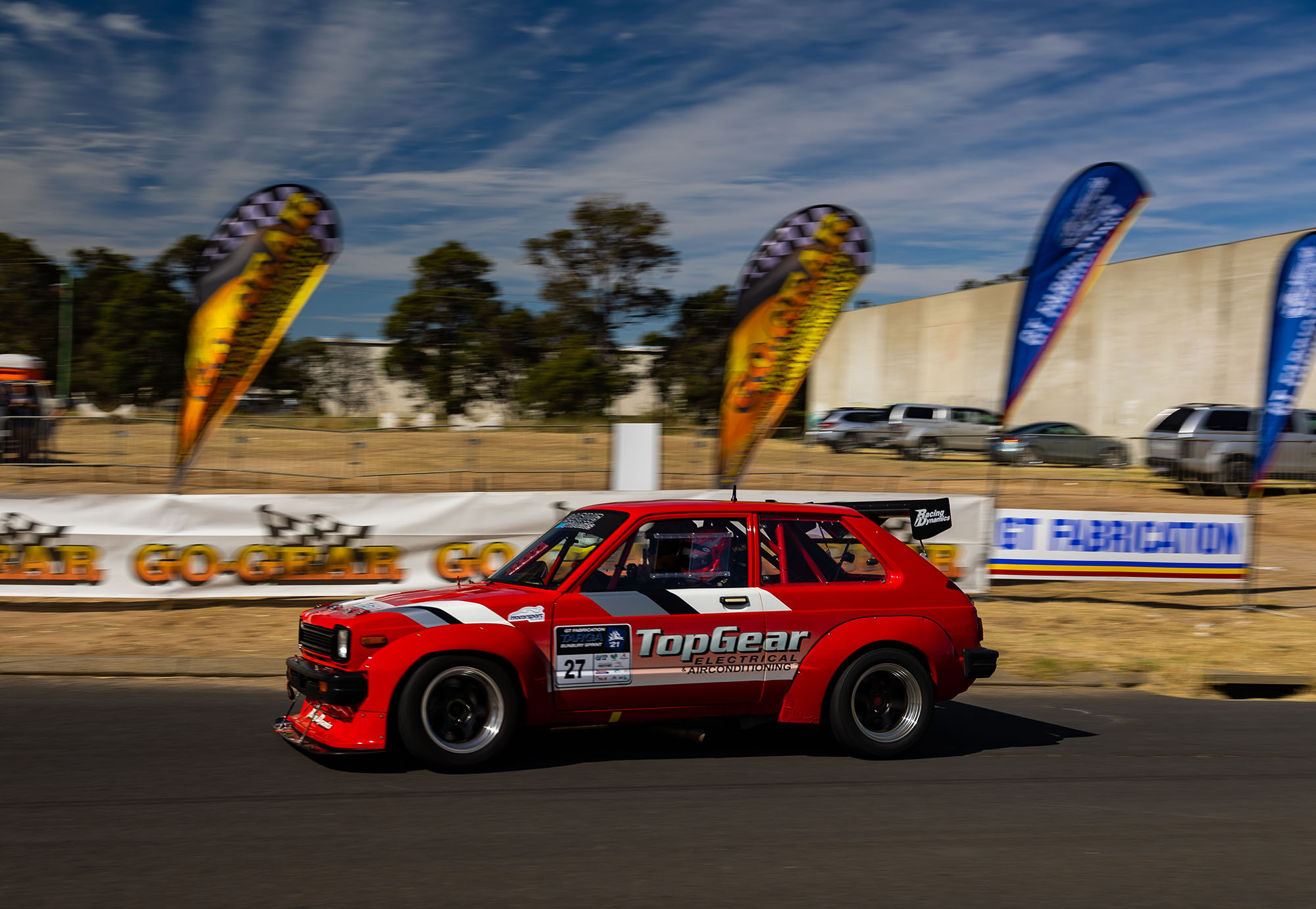 There are eleven classes in the GT Fabrication Targa Bunbury Sprint determined by engine size, 2WD or 4WD and decade of manufacture.

Taking the win in Class I for 2WD up to 2000cc was Simon Gunson and co-driver Murray Armenti in the 1980 Ford Escort Mk II. 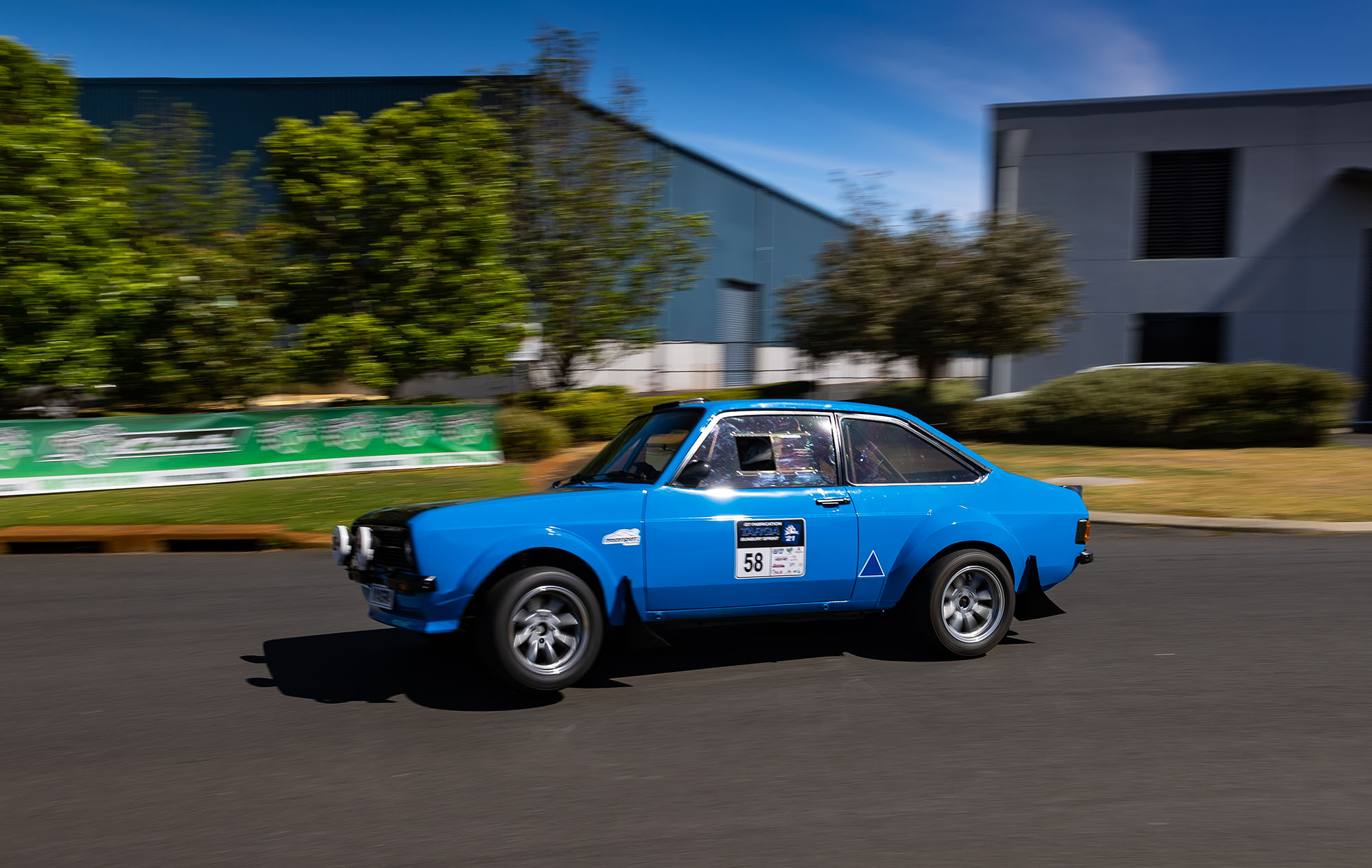 According to Gunson, they only won by default.

“We did a Bradbury! Glenn Badger was leading then the wheels fell off his wagon, so it was just lucky we got the win really,” said Gunson.

“For us, doing the rallysprints in the Escort is just for fun, and me and Murray have laugh – it’s a good car for throwing around corners.

“It’s the first year that the Escort has finished Bunbury – the last two times we didn’t get through all the stages, so we’re happy.”

Another competitor whose Class VII (Classics 1960s) win was by default was crowd favourite Cindy Gielingh-Jones with co-driver and husband Nigel Jones in their cute-as-button 1967 Mini Morris Cooper.

“We are stoked to have done a Bradbury on the last run of the event!” quipped Gielingh-Jones.

“As per usual, Bunbury turned it on for us with so many people loving seeing the mini – we had so much fun!”

The fastest local was Gelorup husband and wife duo Bill and Glenys Stagoll who won Class III (4WD up to 3500cc) and finished in 8th outright in their 2006 Mitsubishi Evo 9.

“It all went extremely well and we had a great run except for one stage, I missed a corner and had to reverse up and lost 9 seconds, but besides that it was incident free,” said Stagoll.

“It was a bit hot, the car got up to 99 degrees, but it cooled down pretty quick.

“I really enjoy competing against Will White, he beat me with the fastest run, I was fastest overall – we were having a bit of a challenge, it was a fun event, I enjoyed it.” 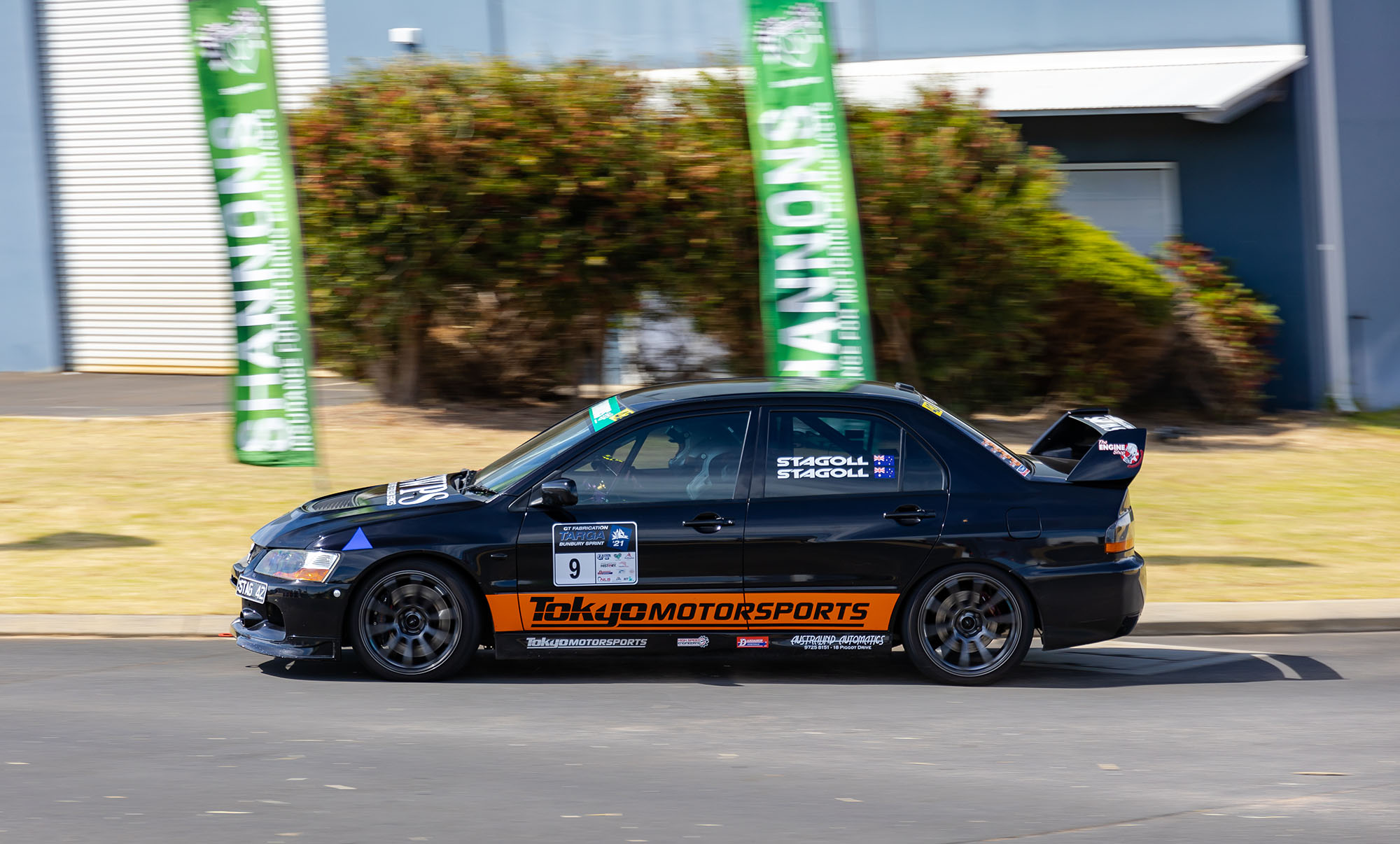 The 2019 Tesla 3 Performance+ driven by Jurgen Lunsmann with his co-driver and wife, Helen, one of three electric vehicles (EV) in the field, won their EV class and finished 11th outright.

Clerk of Course Ross Tapper said that while the heat made for uncomfortable conditions, it was a smooth incident-free event.

“There was strong competition on the field and by all accounts, everyone had a ball.”

The winners of the 2021 Make Smoking History Targa Cup series are: 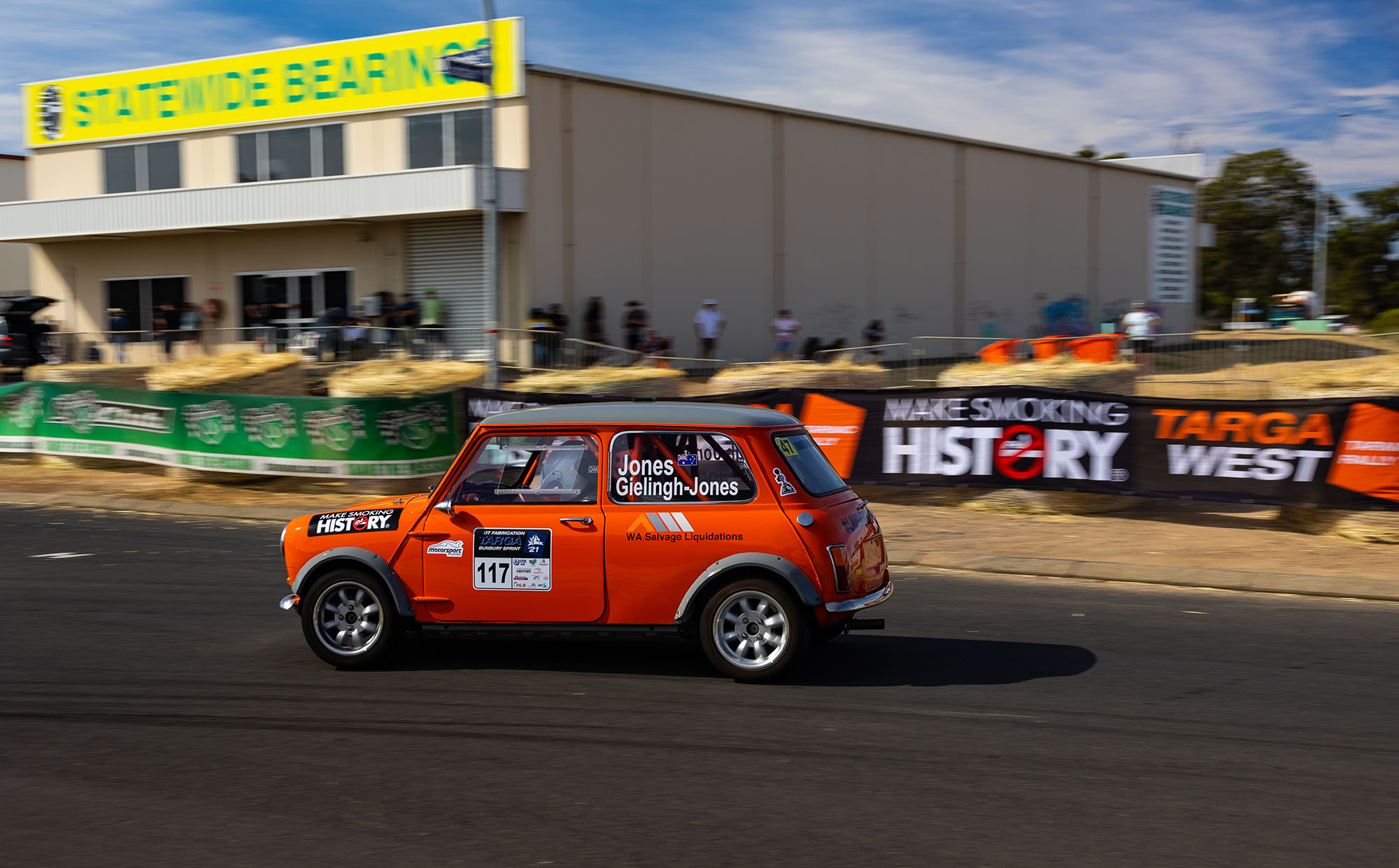