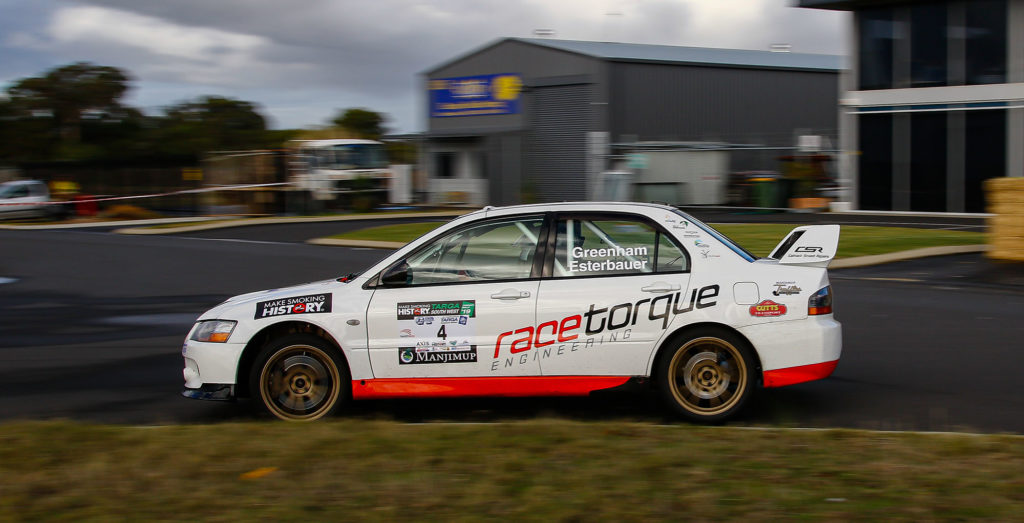 Redemption was the key word at this year’s GT Fabrication Targa Bunbury Sprint after Mark Greenham and Stephanie Esterbauer finished on the top step on the weekend (22-23 June 2019) to take the title in torrential conditions.

Three years ago the duo shut the event down after crashing into two power poles, one of which was broken in two and resulted in a power outage to half of Bunbury, including ironically the hospital they were taken to.

Greenham said after his big crash at the inaugural Bunbury Sprint and subsequent lengthy recovery, the win feels extra special.

“I’d like to thank my family for their support, Race Torque Engineering and of course my fearless (silly?) co-driver Steph for sticking with me these last few years,” Greenham said.

“The wet weather meant we could compete along side the more powerful outright cars and take the overall win in our Targa spec Mitsubishi Evo 9.

“The weather turned out to be more fortunate for our running group in the end, but the constantly changing conditions and of course all our other group competitors meant we had to keep pushing all day right up to the SS8 flying finish,” said Greenham.

Competitors were seeded and split into two groups, even numbers and odd numbers. The heavy rain persisted during almost all of the odd-numbered runs, while the even numbers were fortunate with drier roads. Of the top twenty, just six were in odd-numbered cars.

Finishing in second place less than 7 seconds behind was Paul Brockbank and Josh Gardiner in their Empire Performance 2000 Mitsubishi Lancer Evo 6.

“I couldn’t be happier with the result. We had a front diff explode with two corners to go on the last run, so we limped home and still finished second. Perfect timing really!” said Brockbank.

Third place went to the fastest even-numbered car, Will White and Matt Thompson in their 2006 Mitsubishi Lancer Evo 9, just 15 seconds off the pace for a win.

“We had an awesome weekend, despite the weather which played a major part in the results. We got one dry run and that was it – Sebastian Vettel and I are teaming because we’re both good at spitting the dummy!” quipped White.

“The good thing about being in two groups was that I got to watch some racing for a change.

“Kostera Tyres got us the Dunlop soft tyres which were great in the wet. The car was good and we re-tuned a new engine – the Bunbury Sprint was a great shakedown for Targa West in August.”

“The Porsche is new and in the pouring rain it was like hopping into a death trap, an absolute nightmare! It was the first time I’ve raced the car, I mean, I’ve only had it for ten days,” Cates said.

Despite having no time behind the wheel, on Cates’ only dry run, he was fifth fastest, showing a glimpse of his potential for a podium finish in the future.

“We know the car is going to be fast. The Bunbury Sprint was more of a training run, to see how the car skids, burns, performs on cold tyres, on wet roads and with cold brakes. If the sun shines at Targa West, there won’t be many people who’ll see us!

“In the Torana, we had mostly dry runs and it’s a great fun car to drive. It was really good to see a decent crowd who braved the conditions, Tell you what, I’m knackered now!” said Cates of Bunbury.

Event Director Ross Tapper said that he’s heard nothing but praise from everyone involved, despite the rain.

“It was great to see so many people support the event, huddling under umbrellas and in wet weather gear. There’s a real appetite for rallying in Bunbury and we love coming here,” Tapper said.

Rallysprints are fast and don’t require a huge time commitment. It’s designed for those new to rallying as well as those more experienced who want to keep their skills honed. It requires team work between driver and co-driver and the ability to drive with obstacles in close vicinity of the road, neither of which can be practised on a race track.

Full results of the GT Fabrication Bunbury Rallysprint can be found here.